When writing picture books, we’re told to leave room for the illustrator. Pictures tell half the story. But in graphic novels, the visual story is much more important. A picture is literally worth a thousand words, and the illustrator’s job is daunting.

What does this mean for authors drafting graphic nonfiction scripts?

As one editor told me, you, the author, must fill in the blanks regarding what should appear in the illustrations. You must imagine every panel (those rectangular boxes) and write extensive illustration notes, called panel description. This includes describing actions and emotions for each panel and providing links to art references for the setting, characters, etc.

If you’re moving to graphic novels from picture books, providing lengthy illustration notes is the opposite of what we’re told to do. Picturing the story takes a mental switch and requires us to build our visual storytelling muscles. To see the possibilities, I recommend studying graphic nonfiction, focusing on “reading” the visual story.

Graphic novels have a lot in common with movies, even sharing some of the same language. (For a great post on camera “shots” in graphic novels, see this post on Rikvah Lafille’s site.) But unlike movies, graphic novels don’t show every second of the action. Otherwise, the books would run to thousands of pages.

As Jessica Abel and Matt Madden write in Drawing Words & Writing Pictures, every time you start a new panel, you must make three decisions:

t’s see how some of these decisions play out in this sample from Becoming RBG by Debbie Levy, illus. by Whitney Gardner. 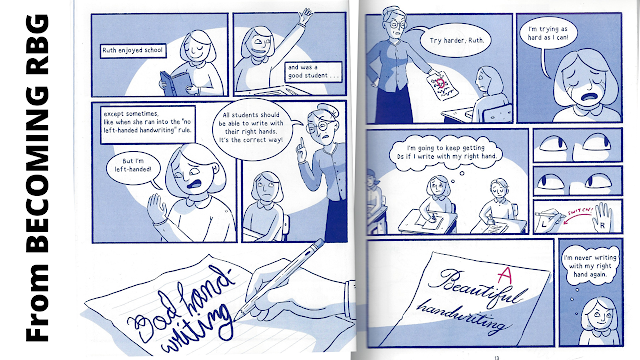 In this spread, a young Ruth Bader Ginsburg learns to dissent for the first time. (For fun, compare this spread to the same scene from I DISSENT, Levy’s picture book biography on the same subject, which was published first.)

The first two panels are summary, a bit of back story about Ruth.  In the first panel, Ruth is reading, and we’re told she likes school. In the second, we shift to a completely different scene maybe on a different day, where Ruth is at her desk raising her hand. By including just one illustration per scene, we get little snapshots of Ruth’s life, and the story keeps moving forward, covering big chunks of time.

Now let’s look at the two middle panels on page 12. This dialog is a snippet of a scene taking place in real time. The jump in time between panels is very small. What’s changed is the focus of the panels, shifting from Ruth to her teacher.

s you study graphic nonfiction you may notice dialog handled different ways visually. Sometimes both speakers are included in the same panel, even if only one speaks. Other times, the “camera” shifts completely from one subject to the other. Sometimes the characters are offscreen, and only their dialog appears with the camera focused on something else completely, like a voice over. This provides variety in the illustrations.

Returning to our mentor text, what happens after the dialog? We get a bigger jump in time, perhaps several minutes, as we move from the teacher’s instruction to a close-up view of Ruth’s finished assignment. Between the panels we’ve experienced both a shift in time – from beginning to end of the scene -- and a shift in focus from the teacher to the assignment. Imagine how this would read differently if we watched Ruth complete her assignment step by step. It would slow down the story unnecessarily.

Let’s move to the middle of page 13. This is another scene in real time, but it’s mostly wordless. We are in Ruth’s head, experiencing her thoughts and emotions as she makes the decision to break the rules and write with her left hand. This is pivotal moment in her life. The pacing slows way down, and the jumps in time between the panels is incremental.

The more you read and study graphic nonfiction, the more well-versed you’ll become in the conventions of visual storytelling, and the easier writing your own scripts will become.

Select a spread from a graphic nonfiction book and analyze the visual story. For each panel, consider: When does the panel take place? Where is it set? What’s the subject or focus? Also consider how the “camera” is moving.

As a bonus, take a scene or two from your own work and consider how it might translate into panels. How would you write the panel description? 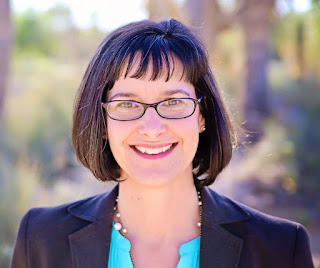 Kirsten W. Larson’s first graphic nonfiction, The Light of Resistance, illustrated by Barbara McClintock, will appear in 2023 from Roaring Brook. Kirsten is the author of the picture books Wood, Wire, Wings: Emma Lilian Todd Invents An Airplane, illustrated by Tracy Subisak (Calkins Creek, 2020), A True Wonder: The Comic Book Hero Who Changed Everything, illustrated by Katy Wu (Clarion, 2021), and The Fire Of Stars: The Life and Brilliance of the Woman Who Discovered What Stars Are Made Of, illustrated by Katherine Roy (Chronicle, 2023).

Find her online at Kirsten-w-larson.com or on social media @kirstenwlarson. 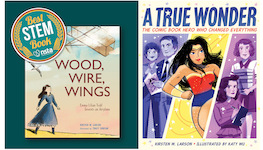