The Art of the Opening Scene

When it comes to narrative nonfiction, I bet we all agree on the importance of opening scenes. I’m talking about the first two or three pages, maybe 600-800 words. You’ve got the grab the reader, prove your story is going to be compelling, convince them they want to know more.

Sure, but how? I wish I had a better answer than trial and error. That’s what works for me.

As I’m researching, I keep a list of possible openings, stand-alone bits of action that are intriguing, and that raise questions. I give special preference to scenes that are documented with primary sources, especially sources that include details of what participants said or thought—the sorts of things a novelist or filmmaker would invent. Then I write the scenes. I write a few different ones as part of my first draft. Try them out, see how they work with the rest of the story.

For my book Bomb, I tried five or six different prologues, moments from all over the story. As I showed each to my editor, she kept saying, “This is good—but what is your book about?” It’s one of those things editors say, and it seems annoying, but turns out to be profound. The question really forced me to think. My answer: I wanted to write spy thriller set in the Manhattan Project. “Fine,” my editor said. “Then make sure your opening scene feels like part of that kind of story.”

With this in mind, I settled on a scene of FBI agents closing in on an atomic spy at his home after the war. It’s entertaining and raises questions. It’s well documented from multiple viewpoints. And it lets the reader know exactly what they’re in for. It’s the kind of thing a teacher can read to a class in a few minutes and, hopefully, convince some of them to pick up the book. The kind of thing you can pull out when you find yourself in the scariest place on earth—the stage of a crowded middle school auditorium. 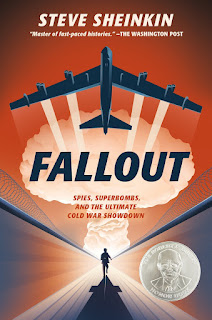 For my newest, Fallout, a Cold War thriller, opening options included an American pilot getting shot down over Russia and a brilliant mathematician at Los Alamos realizing how to build a hydrogen bomb. I settled on what’s probably my favorite opening scene in any of my books: a thirteen-year-old Brooklyn paperboy stumbling into a Soviet spy ring.

It’s a cinematic scene with plenty of documentation. It doesn’t require background knowledge of the Cold War, and it sets up a lot of the stuff I want to talk about in the early chapters. Why are the Soviets and Americans spying on each other? Why are the stakes so high? How can seemingly small details and ordinary people shove the fate of the world in one direction or another?

Think about a current project. Look over your research notes. Pick some favorite moments from your story, things that might work as a two- or three-page prologue. Go through them one at a time and ask yourself:

1. Is it a grabber? Does it pass the I’m-in-a-middle-school-auditorium test?

3. Does the scene/story require a lot of background knowledge or explanation in order to make sense? (If so, it’s out.)

4. Does it set the right mood? Meet the “what is this book about?” challenge?

You’ll likely come up with a few candidates as you research. I’d say write them all. You may well end up using all of them, in different parts of the story. But hopefully one will stand out. When it’s right, you’ll know it! 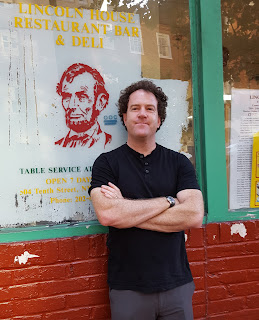 Steve Sheinkin is the NYT bestselling author of fast-paced, cinematic nonfiction for young readers, including Bomb, Fallout, Undefeated, The Port Chicago 50, Born to Fly, and The Notorious Benedict Arnold. Awards include a Newbery Honor and three National Book Award finalist honors. He lives with his family in Saratoga Springs, NY.