“Want to see something amazing?"

When you’re a children’s writer and illustrator accompanying scientists on a ship, at
an Antarctic research station, on a sample-gathering hike or dive, or in a laboratory, there’s only one answer to that question: “Sure!”

Your face may tell another story. And you may live to regret going along.  But it’s best not to give a qualified response.  It’s no use asking, “Alive or dead?” “Is it gross?” Or “Will I be glad after I see it?”

When you’re embedded with scientists — questionable term in itself — it’s best to keep an open mind, and a lid on your disgust response, as well as any expression of mystification.  I spend a lot of time fine-tuning my poker face, and pretending I know what’s going on.

Here are a few more useful things to say:

“Can you help me explain this to fourth graders?” (Translation: I’m not sure I know what you’re talking about.)

“Is there an everyday comparison I could use to explain this?” (Translation: instead of saying that Phaeocystis antarctica plankton “produce” dimethylsulfoniopropionate, can I say that they fart out a material that gives the sea its smell — and that moisture gloms onto to form clouds?)

“What can I do to help?” (Translation: I’m willing to get my hands dirty, as well as to look at ‘something amazing.’ Go ahead and blow my mind.)

I hope I’m not making working with scientists in the field sound like a trial, or a trial by fire. The rewards are immense. Yes, scientists may use jargon heavily; may geek out about incomprehensible objects, concepts, and processes; and may be proud (and occasionally lofty) about their advanced degrees and prestigious institutions.  But they are just like anyone else: they love to have their story told, to share what they know, and to feel understood, as well as fascinating.  (I’ve yet to find one that wasn’t.)

To become a scientist, I’ve learned, one has to be obsessed, and that obsession may have started a long time ago, in childhood. In fact, most scientists trace their science identity — their willingness to geek out about a topic not everyone is interested in, their view of themselves as capable inquirers and researchers, and their ability to learn about or build whatever they need to get their work done — to middle school or earlier.

Who does that remind you of?

I’ll tell you who it reminds me of: myself. My writer self. A bit shy, a bit independent.  Willing to go deep on a topic, to investigate it closely, and to sustain the effort needed to finish an article, story, drawing, or book.  Able to handle rejection, able to chase down acceptance.  And able to assess my own place in the system I’m part of.

Mostly, for me, that system is publishing. I understand my audience and the place my books have in that world, as much as scientists comprehend the contributions they’re making to their field.

This is just part of what I’ve learned by traveling at their sides — diving in submarines, pulling water samples onto rollicking inflatable boats, breaking ice occupied by walrus, fainting in the heat of the summer Caribbean. I’m in a strong position to refute the stereotypical white-coated identity of scientists with my own view of their extreme adventures, their thrilling lives.

Increasingly, my own identity is changing, as I contribute stories of scientists and their work to both their world and the publishing world. I’m working to invite and involve readers from typically underrepresented communities to science fields, to show them that they belong.  I’m saying to them, “Want to see something amazing?”

Not the tail feathers of a dead penguin.

Not the dissected form of a giant tube worm.

Not the green flash just after sunset on a clear horizon at sea.

Not the blip of a massive iceberg on a radar screen.

Yes, all those things. But also a mirror: you have a lot in common with scientists. And a window: Take a look at what is going on out here! And a door: come on, walk through.

Give It a Try:

Why not use drawings and words to tell your science stories? Visual storytelling can reach more people and can inspire new kinds of story and information sharing for you, and your young artists.  Begin by drawing an animal and labeling its parts.  Then, if some part of an animal has more of a story, highlight it and write it up.  Add to this science writing by describing your animal's behaviors, relationships to humans, family life (how many babies does it have? who takes care of the babies?) and even higher level content such as cladograms,  family trees that show species relationships. One more plus: how about a title that shows something more about the animal? 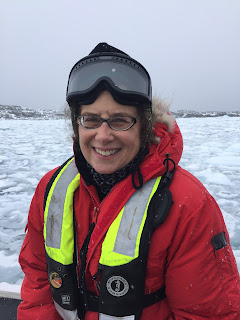 Meet the Author: Karen Romano Young is an author, illustrator, science comics creator, deep sea diver and polar explorer.  She's the author and sometime illustrator of more than 30 books for children, and the creator of #AntarcticLog,  a weekly comic about the climate, and the new comics-based project about science careers I Was A Kid. (see it at IWasAKid.com) She frequently works with scientists doing communications and visual storytelling, taking part in expeditions from the Arctic to Antarctic and many places in between.
Posted by Peggy T at 1:00 AM
Email ThisBlogThis!Share to TwitterShare to FacebookShare to Pinterest