Voices From Our Past, Stories For Our Future

As a child, I was not a fan of history.  For me, history was battles, dates and old white men.  What I loved was English.  Words.  Language.  Stories.  I even looked forward to Friday spelling tests.  But when my teachers pulled down the oversized map at the front of the room or asked us to open our social studies textbooks, my eyes glazed over.  It would be years before I realized that stories are the foundation of both history and English.

In the early 1970’s, I stood out in my class.  Not because of my academic abilities, but because as the often only African American in my class, there were topics that would cause noticeable discomfort among my classmates and ultimately myself. The discussions of slavery painted my entire ancestry with one broad brush of victimhood and were portrayed in stark contrast to the narrative of the kindly white abolitionists and Union soldiers and a tall bearded President who did all of the work in navigating the freedoms of their black brethren.

Our textbooks noted only a smattering of African Americans who made contributions to the country throughout the hundreds of years of American history--Martin Luther King, George Washington Carver, Frederick Douglass, and Harriet Tubman--notable figures who were painted as rare exceptions, a credit to their race, among a host of whites who seemingly built this country, unaided, from the ground up by their sheer ingenuity, tenacity, intellect, and perseverance.

The more I began to read outside of my classroom textbooks, the more I learned about my own history and the history of other marginalized and underrepresented groups.  And it was then that I started writing.  I began writing picture book biographies to fill in the gaps where my history belonged.  I wrote stories of athletes in  Satchel Paige, Game Changers:  The Story of Venus and Serena Williams, Major Taylor:  Champion Cyclist, and Young Pele:  Soccer’s First Star, and how their struggles to compete, to be recognized, to overcome racism and segregation in sports meant I never saw their names alongside those of Babe Ruth and Joe DiMaggio.  I wrote stories of freedom fighters Frederick Douglass, Ethel Payne and Harriet Tubman, whose quest for freedom, equity and truth meant they left behind a legacy of courage. 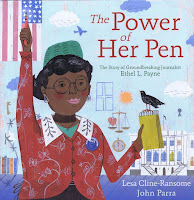 Diving into history to uncover the stories of the vital roles people of color have played in the shaping and building of this country has led me across the political, cultural, educational, and religious spectrum.  It has at times filled me with frustration, exhilaration, contemplation, and nearly always led me to the question, “How did I not know this?”  The answer is so simple and abundantly clear--These stories were never there for me to read.

But the beauty of writing comes in discovering your subjects anew, and introducing them to the world.  By allowing their voices to be heard on the pages of each book we write, we hear their struggle and sacrifice, their hopes and dreams.  Placing them in historic context links together moments in history like connecting the pieces of a puzzle.

In my elementary classrooms, the history that centered on the role of African Americans was focused in slavery or in the Civil Rights movement.  But the richness of our experience didn’t begin and end with those milestones.  We can’t begin to discuss the Civil Rights movement of the 1960’s without discussions that include Jamestown, the role of resistance throughout slavery, Reconstruction, Westward Expansion, The Great Migration, African Americans in the military, and The Harlem Renaissance.

Textbooks today are seeing modest changes in their attempts to provide a more balanced, less Eurocentric view of history, but there is a long way to go.  In the recent New York Times article, “Two States. Eight Textbooks. Two American Stories,” Albert S. Broussard, author of the Texas and California edition of McGraw Hill textbooks stated, “American history is not anymore the story of great white men.”

As a nonfiction author, the job I have is to tell the truth. The sometimes very ugly, hurtful, painful truth. While textbooks have, and often still do, omit the crucial stories that provide a complete, unabridged version of events, my history cannot be erased.

Non-fiction biographies help to bridge the gap by revealing the crucial role of African Americans in the building of this country and demonstrate how the lessons from a troubled history can provide a roadmap for a better future.  They give young readers a broader understanding of our shared history, our culture and our strengths.

These stories hold value not only for the underrepresented children sitting in classrooms, but for all children.

When I look back to find voices from the past, I am looking forward, too, into a future that remembers that a history that tells the honest, balanced, authentic, stories of everyone, is a history that belongs to all of us.

Lesa Cline-Ransome’s first book was the biography Satchel Paige, an ALA Notable Book and a Bank Street College “Best Children’s Book of the Year.  She later created Major Taylor: Champion Cyclist, Young Pele, Words Set Me Free,  Light in the Darkness, Benny Goodman and Teddy Wilson, Light in the Darkness, Freedom’s School, My Story, My Dance, Just a Lucky So and So: The Story of Louis Armstrong and Germs: Fact and Fiction, Friends and Foes, and Game Changers: The Story of Venus and Serena Williams.  Her verse biography of Harriet Tubman, Before She Was Harriet received five starred reviews, was nominated for an NAACP image award, and received a Coretta Scott King Honor for Illustration.  Her debut middle grade novel, Finding Langston, was the 2019 winner of the Scott O’Dell Award for Historical Fiction and received the Coretta Scott King Award Author Honor.  The sequel, Leaving Lymon will be released in Spring 2020.

Lesa’s books have received numerous honors and awards including NAACP Awards, Kirkus Best Books, ALA Notable, CBC Choice Awards, two Top 10 Sports Books for Youth, and an Orbis Pictus Recommended Book. She lives in the Hudson Valley region of New York with her husband, and frequent collaborator, James Ransome and their family.  Visit her at www.lesaclineransome.com.

One lucky winner will receive an autographed copy of Before She Was Harriet.

Leave one comment below about what struck you in the post.
You’re eligible to win if you’re a registered NF Fest participant and you have contributed one comment below.
Posted by Lisa at 3:00 AM 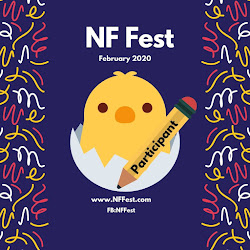