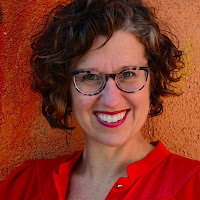 Over the past 25 years, I’ve had various nonfiction writing and editing jobs, from educational publishing to academia. One of my first jobs, though, is the one I probably draw from most today as an author of nonfiction picture books. Early in my career, I was a scrappy city beat reporter for Gazette Newspapers (a chain of local papers owned by The Washington Post). I wrote an average of ten stories a week on every topic from education, crime, politics, and the arts.

The skills I learned in that job serve me well every time I dive into researching a new nonfiction picture book—perhaps even more than the rigorous research skills I learned in academia. Why? Because as a beat reporter, I had to get to the heart of my stories quickly and creatively. I had to be accurate and efficient, and I had to write compelling, compact stories people would pay to read.


On the job, I came up with my own shorthand as I scribbled in my reporter’s notebook around town, interviewing sources, or sitting in city council meetings. (Yes, city council meetings may sound boring, but on my particular beat there was actually a murder plot among the councilmembers! But, I digress...)


I developed techniques to get those ten compelling stories researched and written every week, which I’ve found also work for writing nonfiction picture books. Here are a few:

1. Sniff Out Your Story While You Research

When researching a story—be it a newspaper story or a nonfiction picture book—we can get overwhelmed with information. There’s more info on any given topic than we’ll ever be able to fit into our tight word count. So, what can we do? I call it “sniffing out my story” as I research. (Note: “my” story, not “the” story, as every topic can be written about in countless ways.) Honestly, for me, this is an emotional thing. It’s a tug from a story thread that pulls my heartstrings in some way. Once I feel it, I shift my research focus and notes to the details of that thread. 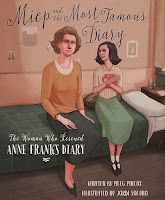 While researching Miep Gies, the woman who hid Anne Frank’s family and rescued her diary—the topic of Miep and the Most Famous Diary—my first potential story thread was Miep’s astounding bravery. But, then, I found myself drawn to something less on-the-surface: the fact that she refused to read Anne’s diary for years after it was published. There was an emotional pull there I just had to follow. Using Miep’s memoir and interviews, I sought out details on her relationship with the diary itself, both what she did with it and her emotions around it. This became my story, and her bravery became my back matter. (By the way, I got to meet Miep in person back in my newspaper days when she spoke at a school on my beat.)

So, how can you sniff out your story while researching? Pay attention to what information pulls you emotionally, then focus your research there. This can take a few tries (and much more time than a beat reporter week), and that’s fine. And it can work with narrative or expository nonfiction. (While researching animals, Melissa Stewart resonated emotionally with underdogs and came up with the story thread for Pipsqueaks, Slowpokes, and Stinkers.) This focusing technique can save you from the spinning cycle of endless, aimless researching and help you hit the ground writing.

2. Sift Out Great Quotes and Details

As we know, it’s the details that make any story come to life. And, really, it only takes a few vivid or unusual details in a news story or nonfiction picture book to make an impact. (That’s all you’ll have room for!)

Once you’ve sniffed out your story thread while researching, seek out those specific details that bring it to life: direct quotations, sensory nuggets, unusual facts. Seek any particulars that give authenticity and presence to your topic. Pluck out those jewels like a kid with a sand sifter at the beach, letting other info fall into context and background. (A prolific, award-winning nonfiction author told us in a workshop at SCBWI-LA that she also uses this technique.)

So, how can you sift details while researching? Pay attention to gems that show something vivid about your subject and context—think five senses, exact words, stand-out moments. Highlight them in your notes. Create a file or notebook just for great details as you research, which you can then easily refer to when you’re writing.

3. Cement Your Word Count Into Your Brain

My newspaper stories had to be between 1,000 and 1,500 words. Does that remind you of anything? Yep, pretty similar to the word count for nonfiction picture books. (And, yep, we could talk word counts for weeks and never come up with a precise number. Each editor has their own “sweet spot,” which I’ve generally found to be between 800 and 1,400 words, give or take, so that’s what I work with.)

This means, with ten stories a week, 50 weeks a year, I wrote 500 stories with this same word count each year. I got to the point where that word count was so natural to me, I didn’t even have to think about it. My brain pathways formed so, as I researched, I knew just how many details I needed to fill my story. I had a learned sense of when I had enough research to start writing. Then, every story I sat down to type came out within word count, without me consciously doing it. This still works for me in writing picture books.

So, how can you cement your word count into your brain? One way: write lots of stories. Write them until it feels like second nature. Another way: type up lots of other people’s nonfiction picture books, so you can experience what the word count and story arc feels like as you put it on the page.


Yes, these research techniques may be a bit scrappy, like my old reporter self, but they haven’t failed me yet. And they keep the research and story-finding process interesting and alive for me—even after all these years.

Meeg Pincus will be awarding a nonfiction picture book critique (manuscript up to 1,500 words) OR an autographed copy of Miep and the Most Famous Diary (winner’s choice!).

Posted by Lisa at 6:00 AM
Email ThisBlogThis!Share to TwitterShare to FacebookShare to Pinterest
Labels: Meeg Pincus, research