Crafting a True Story When Information is Scarce

In June of 2014, I took a picture book writing class called Nonfiction Archaeology…and it was love at first sight. The instructor suggested we Google first woman to do this and first man to do that. One of the names I came up with was Sarah E. Goode, who, according to the one line of information on a Black History website, invented a cabinet bed in 1885 and was the first African American woman to receive a U.S. patent. Wow, I thought! That was pretty awesome for an African American woman to do that, just twenty years after the end of the Civil War. I wanted to find out more about her. 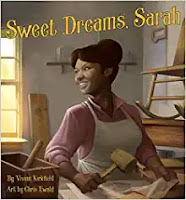 But there wasn’t anything more. I searched websites, library catalog but there was nothing. Just the same few lines of information (which I came to find out were incorrect anyway). I even reached out to the Sarah E. Goode STEM Academy in Chicago, Illinois. That was a dead end also – they didn’t know anything about her. I was flabbergasted. And so sad for Sarah. She’d accomplished something astonishing, yet was completely unrecognized except for the patent she’d received.

So, what do you think I did? I wrote a story called The Disappearing Bed (which became Sweet Dreams, Sarah). If any of my long-time critique buddies are participating in NF Fest, they will probably remember receiving that manuscript. I started the story with a young girl during the Civil War (I had Sarah’s approximate date of birth and knew she was about ten years old when the war ended). I told a story about how she had a dream of a different life. And how, after the Civil War, she had moved north to Chicago – with freedom in her pocket, hope in her heart, and ideas swirling in her head.

Slowly but surely, I continued researching to try to find more evidence to help me craft an authentic and accurate story that would engage readers while honoring Sarah.

I checked census records for Chicago’s Cook Country. Sure enough, in the 1870 census, I found Harriet and Oliver Jacobs, parents of Oliver Jr, 14-year old Sarah, and two younger siblings. The next census, in 1880, showed a 24-year Sarah E. Goode, married to Archibald Goode, with a little girl named Inez. And when I checked old city directories of 1884, I found two listings for Sarah E. Goode, a residential one that showed she and her husband owned a house that took in lodgers, and a business listing showing she was the proprietor of a furniture establishment on State Street.

Here’s a tip: use those little tidbits of info as you craft your story. Here’s how I used the information that she took in lodgers:

Sarah rented out rooms in their house to people who needed a place to live. She saved every penny she could to pay for her third dream, her own furniture store.

My next move was to reach out to my local research librarian. She reached out to other librarians at some of the university libraries. They responded with an old image of State Street in Chicago circa 1885 – and they circled the furniture store they thought was probably Sarah’s. But they, too, had no other information. What to do?

I was able to see her patent on the Internet. She originally applied in 1883 and it took a year for the government to get back to her with a denial. I was also able to see she reapplied in 1884 and received her patent in 1885. Those became very important moments in the book.

I googled Find a Grave and discovered Sarah was buried at the Graceland Cemetery in Chicago…I called the cemetery office and for $10, they sent me a list of the people who were buried alongside her in the Goode family plot, the age they died and what they died from.

And then, using my local library’s online database, I found two old newspaper advertisements – the first from 1884 for Sarah’s furniture store. The second, from 1887 from another vendor who claimed he was the exclusive seller of Sarah’s cabinet bed. Sure enough, when I checked the city directory for 1890, Sarah E. Goode’s business was no longer listed. Referring back to the grave information, I discovered that Sarah’s child and mother died in 1886, the year after she received the patent. Perhaps she fell into a depression. Possibly she became ill and was unable to continue her business. She died in Chicago in 1905 at the age of forty-nine.

That information is not part of the narrative, but it did give me more insight into the person Sarah was, and I do include it in the back matter. I am crafting stories for young children and my goal is to inspire them to dream and build their dreams into reality just like Sarah built her cabinet bed. I took the few facts that I was able to verify and I used them as the frame for the narrative. I never put words into Sarah’s mouth. But I did assume that she had moments of doubt and difficulty, as any inventor might. 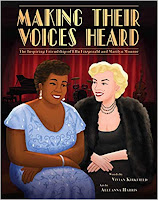 As I crafted Making Their Voices Heard: The Inspiring Friendship of Ella Fitzgerald and Marilyn Monroe, I faced similar problems. Although I was able to watch YouTube videos of jazz singer Ella Fitzgerald and movie star Marilyn Monroe, I wanted their friendship to be the focus of the book. And none of the resources I read told me anything about that. In one of those taped interviews, I heard Marilyn say that Ella was her favorite person in the world and that she loved her. I watched an interview where Ella mentioned that she owed Marilyn a great debt and that Marilyn was a special person, ahead of her time. Was that enough to conclude they were friends? I didn’t think so.

Luckily, after some detective work, I was able to have a telephone conversation with the woman who was Ella’s promoter for thirty-seven years and she confirmed that they were friends. Although I read many books about Ella and Marilyn, the story I wrote wasn’t based on those. It was based on the photo that I saw on the Internet of Ella and Marilyn sitting side by side in a nightclub. That photo sparked my interest and when I discovered how they had both battled different types of discrimination and forged a life-long friendship, I became passionate to tell the story.

My advice for crafting a true story when information is scarce? Gather the facts you can verify. From those facts, find the focus of the story and create a well-paced, accurate, and action-packed narrative that will keep kids turning the pages!

Writer for children—reader forever…that’s Vivian Kirkfield in five words. Her bucket list contains many more than five words – but she’s already checked off skydiving, parasailing, banana-boat riding, and visiting critique buddies all around the world. When she isn’t looking for ways to fall from the sky or sink under the water, she can be found writing picture books in the quaint village of Amherst, NH where the old stone library is her favorite hangout and her young grandson is her favorite board game partner. Vivian blogs at Picture Books Help Kids Soar where she hosts the #50PreciousWords International Writing Contest.

ABOUT THE PRIZE
Vivian Kirkfield will be awarding a picture book manuscript critique to one lucky winner.

Posted by Lisa at 6:00 AM
Email ThisBlogThis!Share to TwitterShare to FacebookShare to Pinterest
Labels: biographies, research, Vivian Kirkfield