Are you ready to dig down and get nitty-gritty with craft? I hope so, because today we’re talking… scenes! We can’t write narrative nonfiction without them.

Scenes are the building blocks of true story; whether you’re writing a picture book, middle grade, or YA. Each scene is a microcosm of your larger story. Each takes the reader into a crucial moment in the narrative. And each not only drives the story forward, but also fosters a sense of immediacy by showing the action up close.

Since the first two are self-explanatory, let’s focus on the third element, change. Think of your scene as a mini-story with a rising energy that builds to a change. Love to hate. Joy to sorrow. Belief to disbelief. Confusion to clarity. Something must be different at the end of the scene than at its beginning.

Let’s take a look at this scene from Honeybee: The Busy Life of Apis Mellifera:

On the morning Apis drops to the ground,

the air is warm. The sun is rising. And the 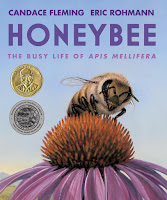 She rolls to her back.

Above her, blossoms nod in the summer

You’ll notice the scene starts as close to the action (dying) as possible. And it ends the moment the change occurs (death). It has a purpose because it shows the reader something vitally important to the story. It deepens reader emotion for the character. And it moves the story forward to its logical conclusion.

There are three types of scenes:

No characters and one change:

In the heart of the command center, a single wire, stiff and brittle from 10,000 cycles of heating and cooling, snapped away from the circuit board. It set off an alarm--a pulse of electricity--that raced to a tiny light on a monitored panel. But the light,  never used and never tested, failed to switch on. Those two failures, broken circuit and burned out bulb, would have terrifying consequences.

(From my forthcoming middle grade Bletchley Girls: The Teenagers Who Helped Win A War)

One character making one change:

But one day when MacArthur was two months old, zoo officials decided to take him back to the zoo. Helen held her baby close until the car came. And tried to smile as MacArthur was driven away. Then she folded up the baby blankets; stowed tub, crib, and bottles; and sank into the rocking chars with empty arms and an empty lap.
(From the picture book Cubs In The Tub: The True Story of the Bronx Zoo’s First Woman Zookeeper) 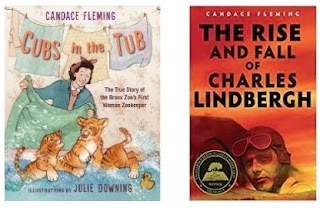 Two or more characters one change:

Charles was on board doing his usual chores when  Bruce and Richard approached.
“Colonel,” said Bruce. “I have a message for you.  They have found the  baby.”
“Found --?” cried Charles.
“He is dead.”
Charles rubbed his forehead. His eyes were bloodshot, and for a second he looked a little
unsteady. Then he glanced around the cabin. “I’m going home,” was all he said.
Alone, he drove through the darkness toward Hopewell.
(From the YA biography, The Rise and Fall of Charles Lindbergh)

Each has a specific place and time, as well as one change. But notice how that change (small, but complete) drives the story forward, compelling the reader to turn the page and find out what happens next. Additionally, each comes in close, using, dialogue and description, emotion, and atmosphere to show an event. They are active. And they are 100% accurate. Not a single detail – not that dialogue, the description of wires, the bloodshot eyes, or the forehead rubbing – is invented. This is nonfiction, after all, and every detail in our scenes must come from a reliable source.

Scenes are held together by short sections of summary. Summary tells the reader something necessary without creating a full scene. You can use summary to transition between scenes, set the tone or mood for the next scene, leap forward in time, or explain something (context) your readers will need to understand the next scene. We can identify it by its lack of time and place. But just because summary is “telling” rather than “showing,” does not mean it’s boring. Good summary is compelling and should whet your reader’s appetite for the next scene. Here’s an example of a short scene flanked by two bits of summary:

Carter traveled by steamship to Alexandria, and by train to bustling Cairo, by ferry across the Nile River, and by donkey up a steep desert trail to a set of tombs carved high in the cliffs. (summary)

That first night as he lay on a rough mattress made of woven palm sticks, he felt exhausted, overwhelmed, and a little homesick. He was, he told himself, “on the eve of an adventure.” The teenager’s new life had begun. (brief scene)

For months afterward, he copied the paintings that decorated the long, winding tunnels of the dark tombs…. (summary)

The best narrative nonfiction is a mix of scene and summary. In my own writing--whether I’m tackling a picture book, or YA--my goal is to use as many scenes as possible. I try to use more scenes than summary. I try to keep my summary short.

Now, it’s your turn. Gather up your favorite narrative nonfiction and identify the scenes. What is each changes effect upon the story? How does it drive the story forward? Is the scene designed to slow the pace (contemplative) or bring up the energy (suspense)? Look at the summary. Will it keep reader interest? Does the information it contains lead seamlessly to the following scene? And lastly, what’s the ratio of scene to summary? Do those books with more scenes read more compulsively? Do they have a stronger narrative impulse, drawing readers on with ease?

Candace Fleming writes picture books, middle grade, and YA. Among her nonfiction titles are Giant Squid, Amelia Lost and The Family Romanov. She is the recipient of the Los Angeles Times Book Prize, and the Orbis Pictus Award, as well as the two-time recipient of both the Boston Globe/Horn Book Award for Nonfiction, and SCBWI’s Golden Kite Award for Nonfiction. This year she won ALA’s Sibert Medal for Honeybee: The Busy Life of Apis Mellifera, as well as the 2021 YALSA Excellence In Nonfiction Award for The Rise and Fall of Charles Lindbergh.

Candace Fleming will be awarding a manuscript critique of a nonfiction picture book up to 1,500 words.

Posted by Lisa at 6:00 AM
Email ThisBlogThis!Share to TwitterShare to FacebookShare to Pinterest
Labels: Candace Fleming, scenes