What Is Literary Nonfiction?

Both adult and publishers and children’s publishers divide fiction and nonfiction books into two broad categories—commercial and literary.

Commercial fiction, written by such authors as Mary Higgins Clark, Gordon Korman, Stephen King, Mary Pope Osborne, James Patterson, and Lauren Tarshis, has mass appeal, and editors expect it to make a substantial profit. These books are fast paced with strong plots and limited characterization. Their themes are usually fairly obvious, and the language and syntax isn’t too complex.

Similarly, commercial nonfiction for children has mass appeal. These active and browsable titles generally sell well in bookstores and mass market outlets (like Target and Walmart) with some crossover to schools and libraries.

Literary nonfiction for children, on the other hand, is more likely to wins awards and is considered higher-quality writing. These expository literature and narrative nonfiction titles sell primarily to schools and libraries with some crossover to bookstores and, occasionally, to mass market outlets. 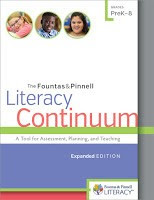 When educators use the term “literary nonfiction,” they are (understandably) thinking more about craft moves than sales potential. According to The Fountas and Pinnell Literacy Continuum (Heinemann, 2016), literary nonfiction is “a nonfiction text that employs literary techniques, such as figurative language, to present information in engaging ways.”

Because nearly all current state ELA standards are heavily modeled after the Common Core State Standards (even in states that never adopted CCSS), it’s worth looking at that document too. It focuses more on types or forms of writing and lists the following as examples of literary nonfiction:

—some personal essays and speeches 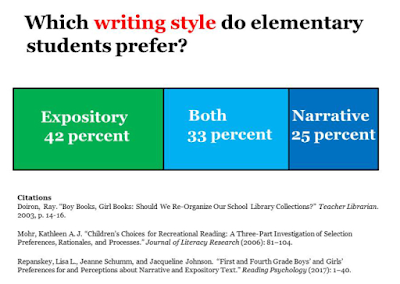 The 5 Kinds of Nonfiction classification system (which focuses on children’s nonfiction books exclusively and doesn’t include essays, speeches, letters, journals, textbooks, brochures, catalogs, etc.) differentiates between commercial categories and literary categories because one of its goals is to give authors, editors, agents, book reviewers, awards committee members, librarians, literacy educators, and classroom teachers a common lexicon for discussing the wide and wonderful world of nonfiction for kids. Only then can publishers understand the kinds of nonfiction books that ALL students want and need.


Because most editors gravitate toward narratives, publishers have put a lot of emphasis on narrative nonfiction in recent years. But that’s slowly starting to change, as the children’s literature community realizes two important things:

1. About 40 percent of young readers prefer expository nonfiction.
2. Four of the five categories in the 5 Kinds of Nonfiction classification system have an expository writing style. 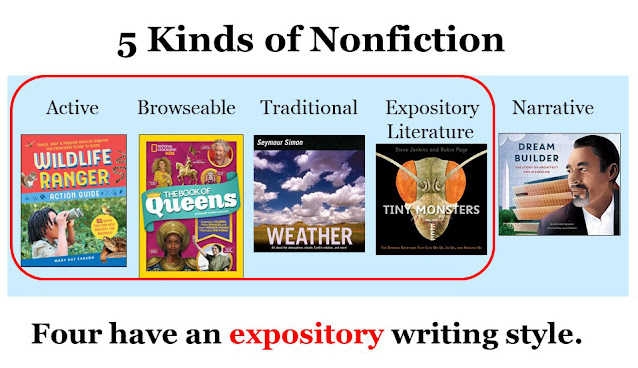 Based on that knowledge, publishers are beginning to acquire more expository literature, making this an expanding market for authors and illustrators. There are currently two notable gaps that need filling:

Nonfiction creators also need to look for creative ways to incorporate what kids love about active and browsable nonfiction into books with the elements of finely-crafted nonfiction prose. Perhaps these are areas where you can contribute to innovation and evolution happening right now in children’s nonfiction.

Using the information above and book descriptions available on the internet, classify each of the titles below as either literary nonfiction or commercial nonfiction. Then, after exploring the links above, use the 5 Kinds of Nonfiction classification system to categorize the books as active, browsable, expository literature, or narrative.

Honeybee: The Busy Life of Apis Mellifera by Candace Fleming

The Next President: The Unexpected Beginnings and Unwritten Future of America’s Presidents by Kate Messner 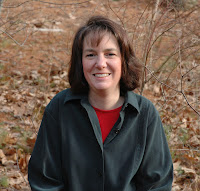 Melissa Stewart has written more than 180 science books for children, including her upcoming title Summertime Sleepers: Animals that Estivate, illustrated by Sarah S. Brannen. She co-wrote 5 Kinds of Nonfiction: Enriching Reading and Writing Instruction with Children’s Books and edited the anthology Nonfiction Writers Dig Deep: 50 Award-winning Authors Share the Secret of Engaging Writing. Melissa maintains the award-winning blog Celebrate Science and serves on the Society of Children’s Book Writers and Illustrators board of advisors. Her highly-regarded website features a rich array of nonfiction writing resources.

Melissa Stewart will be giving away a 30-minute Q&A Skype session.

Posted by Lisa at 6:00 AM
Email ThisBlogThis!Share to TwitterShare to FacebookShare to Pinterest
Labels: literary nonfiction, Melissa Stewart