Spending some time talking books with elementary school kids, and it won’t be long before the topic turns to graphic novels. It’s a favorite form among young readers, and for good reason. The interplay of text and illustrations appeals to readers of all levels and allows for some incredibly creative storytelling. Nonfiction writers can create in this world, too. Whether you’re hoping to craft an entire narrative told through comics or just include some graphic sequences as interludes, here are some things to think about when you’re researching and getting ready to write.

1. Think visually. Writing graphic nonfiction is a lot like writing the script for a documentary. For each panel of the art, you’ll want to think not only about what information you’re sharing with readers but what they’ll see on the page. When you’re researching a subject, look for scenes in the person’s life or moments in the story that are particularly visual. What mix of long shots, medium shots, and close-ups might best tell that part of the story?

2. Research with the art in mind. My History Smashers series, which is illustrated MG nonfiction, aimed at unraveling historical myths, incorporates graphic sequences as part of the storytelling. When I’m doing research for this series – whether I’m collecting details about suffragists, Pearl Harbor, or the Titanic – I’m always thinking about those sequences. Which scenes will be the most exciting and the most visually interesting for an illustrator to draw?

3. Keep the narration tight. Economy of words is essential when you’re writing in a graphic format. There’s only so much space for narrative at the top of a comic panel, so plan on a sentence or two at most for each illustration. One way to keep the word count down is to think about what information can be told through the illustrations instead of through text. You don’t need to write, “He stood at the podium and gave a speech that historians would always remember.” In the art, we’ll see him at the podium. You can just write, “The speech made history” and let the drama of the illustration tell the rest of the story.

4. Don’t forget about the speech bubbles. Those speech bubbles in graphic nonfiction provide an amazing and accessible way for kids to engage with primary sources, such as historical speeches. When you’re doing your research, keep an eye out for those opportunities. Here’s an example of one of Frederick Douglass’s speeches, portrayed in one of the graphic panels of History Smashers: Women’s Right to Vote. 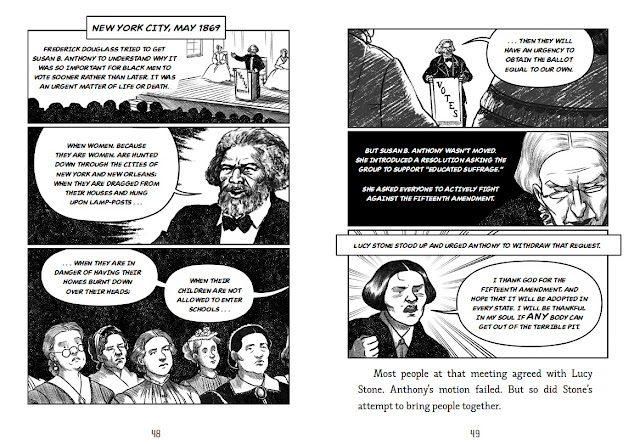 5. Oral histories are especially great sources for graphic nonfiction. When I was working on History Smashers: Pearl Harbor, I spent hours poring over the National Park Service’s online collection of oral histories surrounding the attack. Often, these included not only historical details of an event but also snippets of recalled dialogue and even sound effects. Here’s one of the scenes that illustrator Dylan Meconis and I crafted, based on the memories of survivors from the USS Oklahoma.

Graphic sequence: (Illus note: AH Mortensen was a skinny guy - 144 lbs – I’m sharing a photo of him when he’s a little older, but it might help? In the illustrations he should be wearing pajama pants & no shirt)

Panel 1 narration: AH Mortensen was a sailor on the USS Oklahoma. He woke up to the air raid warning that morning.

Panel 1 des: Mortensen getting out of an upper bunk w/ words “This is not a drill!” in air.

Panel 2 bottom narration: It lifted the ship right out of the water.

Panel 3 narration: When the second and third tornadoes blasted into the ship, Mortensen hit the deck. There were even more to come. “It just seemed to be a swarm. It was just one after the other.”

Panel 4 narration: Right away, the ship started to list. It was going to capsize!

Panel 5 narration: The compartment Mortensen was in began to fill with water.

Panel 5 des: Water streaming in through a porthole.

Panel 6 top narration: He and some fellow sailors treaded water as the ship rotated around them. They were trapped…upside down…

Panel 6 bottom narration: …and running out of time.

Panel 7 narration: Their only hope was the porthole, now underwater. So Mortensen took a deep breath and dove….

Panel 9 des: Mortensen motioning other man to go out.

Panel 10 narration: One by one, Mortensen and ship’s carpenter John Austin helped their fellow sailors escape, until they were the only two left.

And here’s what the spread looked like with Dylan’s final art: 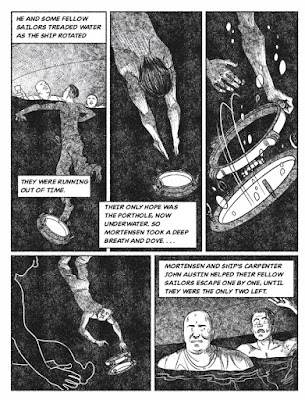 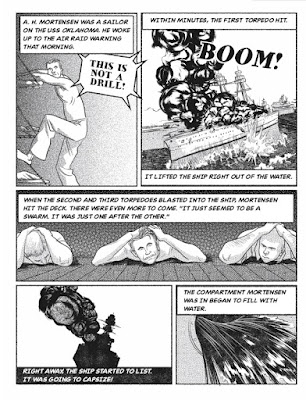 There’s a bit of a learning curve when you’re writing in this form, but it’s well worth the effort to experiment. I’ve found that it opens up so many more possibilities for cinematic storytelling, and when we’re talking about engaging kids with history (or STEM topics!) that’s pretty exciting to think about.

Want to experiment with writing your own nonfiction graphic sequence? Choose one of the Pearl Harbor oral histories from the National Park Service: https://www.nps.gov/valr/learn/historyculture/oral-history-interviews.htm. (Or a different oral history of your choice!) Take some notes, and then write up a script for how it might look as a script for a graphic sequence. 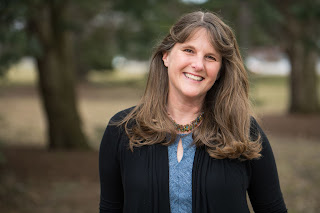 Kate Messner is passionately curious and writes books for kids who wonder, too. Her award-winning titles include picture books like Over and Under the Snow and How to Write a Story; novels like All the Answers, Breakout, and Chirp; engaging nonfiction like The Next President and Tracking Pythons; the Fergus and Zeke easy reader series, the popular Ranger in Time chapter books, and the new History Smashers illustrated nonfiction series, aimed at unraveling historical myths and sharing hidden truths. Learn more at her website, www.katemessner.com.
Posted by Lisa at 6:00 AM
Email ThisBlogThis!Share to TwitterShare to FacebookShare to Pinterest
Labels: graphic nonfiction, Kate Messner