I never planned to be a writer. I had graduated college at 19 as a biology major and went directly to grad school from which I emerged with an MA in science teaching. I had written a grand total of two papers during my entire higher education. I married at 21 and promptly went to work as a science teacher so my husband could earn his PhD. My first son was born when I was 25 and our intentions were that I be a stay-at-home mother.

But we still needed money and I needed something interesting to do at home. I saw an ad in the NY Times for teachers to write educational materials. Hmmm! I figured that after several years of teaching of talking about science, I could probably write about it. Not so fast, said the world.

I pursued the ad and after three revisions of the first chapter to make it “sound simple,” I received my first contract for a high school chemistry book. I got paid but the book didn’t get published. Found another publisher; wrote two more titles, Molecular Biology and Biological Measurement for a publisher who went bankrupt.

Through networking, I was invited to lunch by an editor (who drank three martinis while the clock ticked for my babysitter.) I showed him my three unpublished books. “Vicki, you have to write a book for us.”  “Fine,” I replied. “How about The First Book of Logic?” (I had had one course in logic in college.) “Okay,” he said, “You give me an outline, I’ll give you a contract.  How long before the outline?”  “Six weeks,” I said, figuring I could learn enough logic in six weeks to write the outline; after that I would worry about the book.

Principle #2:  When opportunity knocks, think of these three things: 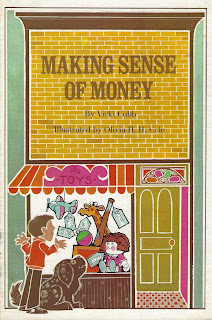 Two out of three and I grabbed it. Also, one very useful phrase is, “Let me think about it.”

My son was five years old when my first book was published. I was on my way.

I got a contract to write a book called Making Sense of Money for a multi-author series. My editor was a formidable older woman, Lillian McClintock. After I turned in my manuscript, she wrote me I letter that said, in part: “Writing for children is a serious endeavor. This work is entirely unsuitable. You have no business becoming a part of our profession.” Wow! Devastation! My husband said I should tell her to do something with the script that is anatomically impossible.

Principle #3: Don’t hesitate to bite the bullet when necessary.  I wrote Lillian by return mail: “Thank you for your comments.  [She had them all over the manuscript.] I hope my next attempt comes closer to your expectations.”

I couldn’t look at it for three weeks but then worked through it. It was published and I wrote another three books for her series. I read some of the other authors who worked for her; we all sounded alike.

Principle #4: Stand your ground when forced to work against your nature.  My biggest hit, which established me, is Science Experiments You Can Eat. Its editor, who had moved to a different publisher, commissioned me to write Lots of Rot. The opening sentences went like this: “Want to smell something rotten?  Take a deep breath by a garbage can. If it’s rotten your nose knows. All it takes is one sniff. Yuck!”

The heavily blue-penciled manuscript by a junior editor had changed the language thus:

“Have you ever smelled something rotten? You probably have if you’ve taken a deep breath by a garbage can."  No “Yuck;” no play on words. I felt as if I’d been kicked in the stomach. I requested a meeting with publisher and editor. I prepared a document, “In Defense of Lots of Rot.” I bought a new suit.  I pled my case. Three days later they told my then agent, “If Vicki won’t write the book the way we want it, we won’t publish it.” Anticipating this, I had another publisher lined up. So, I told my agent to pull it. And it had a run of 25 years with the second publisher along with a couple of other books in the same vein.

Drive: The Surprising Truth About What Motivates Us by Daniel Pink was a touchstone book for me. It defined the three most important things we all crave to find fulfillment in our work after procuring a livelihood.  It led to the next principle.

Principle #5:  There are four goals to having a happy working writer’s life:

#7.  During times when cash flow become a trickle, do something every single day that could potentially a lead to money. Keep asking yourself “What CAN I do?” Then do it.

#8.  Regard your agent as a partner in your career.  My second agent, who came into my life more than 20 years ago, hounded me to obtain rights reversions. Never knew so much work could be sold again and again.

#9.  Refine your brand.  What do you, as a human being, bring to your work that is distinctive? Mine is in my logo.

#10.  NOTHING IS WASTED!  Proposals that didn’t sell, dreams that were not realized, don’t reflect badly on you. The most elusive aspect of a hit is timing. Mine has been off for most of my career.

Write a short paragraph on a principle you may be struggling with. Send the paragraph to email@vickicobb.com. Vicki will  select ten people to attend a free Zoom conference to discuss these issues with her. 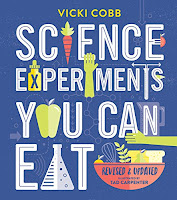 Vicki Cobb is the acclaimed author of 95+ nonfiction books for children, including Science Experiments You Can Eat. Her numerous awards include a Sibert Honor and a Lifetime Achievement Prize from the American Association for the Advancement of Science in 2012. Currently, Vicki is president/founder of INK Think Tank, Inc, a nonprofit that promotes the use of nonfiction literature in the classroom. Check out her websites: www.vickicobb.com, www.inkthinktank.org, and www.nonfictionminute.org.
Posted by Lisa at 3:00 AM
Email ThisBlogThis!Share to TwitterShare to FacebookShare to Pinterest
Labels: the writing life, Vicki Cobb